Alain Prestat is the Chairman Emeritus of Progress Associés that he joined in 2004.

He successfully led Progress Associés’ effort to achieve two key objectives: improving the quality of management in companies in order to contribute to their performance and, at the same time, supporting the professional and personal development of their talent.

He began his career at France Telecom before joining the French Ministry of Industry in 1978, where he worked as head of the commercial and international affairs office of the Raw Materials department.

In 1982, Alain Prestat returned to France Telecom, where he took charge of the Data Communications and New Services department. In 1984, he moved to Matignon, the French Prime Minister’s residence, where he worked as chargé de mission. He remained in the cabinet as adviser for industrial and technological issues.

He then joined the Thomson Electronics Group as Director of Planning at Thomson Composants, and became Group director, a position that he held until 1988, when he entered the cabinet of Prime Minister Michel Rocard as Assistant Director.

In 1992, he was named President of Thomson Multimedia. In 1997,  he founded and chaired Prescott, a firm of consultants specialized in industrial strategy and financial engineering.

Alain Prestat is a graduate of the Ecole Polytechnique,  the École Nationale Supérieure des Télécommunications and Ingénieur général des Mines. 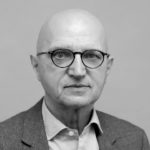