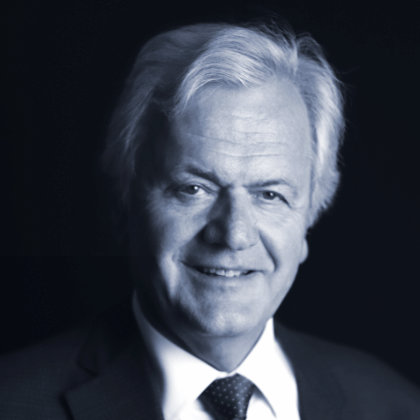 Yves Gabriel is part of our team of Senior Advisors. They support the firm in its strategic positioning and contribute to the development of new offers and the strengthening of the network.

Yves Gabriel spent his entire career working for the Bouygues group. He held the position of Civil Works Engineer for SGREC Routes et Travaux Publics, before creating SCREG Bâtiment, which he led as Managing Director. From 1989, he also took on the responsibility of the Industrial Construction division of Bouygues Construction. In this role, he handled the acquisition of Ballestrero, which he then presided over.

In 1992, he was appointed Deputy General Manager of SCREG Group.

In 1996, Yves Gabriel joined Saur as Deputy General Manager, before becoming General Manager in 2000. From 2002 to 2015, he was CEO of Bouygues Construction and a Board member for Bouygues S.A.
In 2015, he founded his own consulting firm, Yves Gabriel Consulting and, in that same year, he was also appointed as a senior advisor at Olivier Wyman.